There are bands you always wish that you get a chance to listen to live in concert, but being in India that doesnt often become a reality. Big Band concerts are few and far between and often limited to the same set of bands. Now the indian rock scene is an interesting one. There are more bands than you realise and they are all trying to fight for the top positions in india and believe me its not a easy thing to do.

Junkyard Groove is one such band. I first heard of them through Rajat. They had appeared on Channel V’s Launchpad and they apparently played an epic version of ‘Dont Cha’ by PCD. That piqued my interest and after a little bit of digging around i found out that they gave their music away for free download, actually they would get paid if people downloaded their music. So i got all their tracks downloaded and i was hooked. I got people hooked as well. I keep doing that. I am a self-confessed music explorer ever on the lookout for good alternative music. My latest find was ‘Pumped Up Kicks’ and before that was ‘Newton Faulkner‘. I would like to mention more but i digress.

So when i came to know i was going to work in Chennai, i was hoping to get a piece of the music i had heard so much about. But 7 months passed by and with no luck. I sincerely feel that finding out events in big cities(or small) is not easy. I know there is Burrp but that isnt always so helpful. For eg., i finally came to know about the JYG gig via a friend and more info via a Facebook event. I had to be there for the concert. I was not going to miss this opportunity and i started rounding up people to go along with.

Junkyard Groove had all of a sudden undergone a breakup barely a couple of months back. It happened on their Facebook page where 3 of the quartet decided to call it quits while Ameeth was left in the dark about the whole thing. Sad stuff. When i heard that they had called it a day, i was sad. I thought i should somehow finish a tribute post to them but soon i came to know that the line-up was reformed by Ameeth.

The new JYG line up has Hudstin Fernandez on drums, Naveen Thomas Joseph – Fan Page on lead, Ameeth Thomas on vocals and acoustic guitar and Sajith Satya on bass …..

This was good news, but even better was the fact that they would be playing their first gig at nearby EC41.

So 17th July was the d-day and we made it in time. Bassin Bridge was headlining for them. Sajith played the Bass for them as well. So the show began and that was one awesome night. I missed the fact that i didnt have a camera to capture those wonderful moments. I had to make do with Nievu‘s android phone. So not much could be salvaged from that. Hardly anything is clear but then i could not be choosy either. The venue was wild, underneath the moonlight sky they played with the bay in the background. After the first few songs, me and Reddy made our way downstairs and we spend the rest of the night there. In front of the band, enjoying the music we swayed, barely a meter from the band. I didnt want it to end and i screamed the songs and headbanged through the night so much so that i had to take the Tuesday off ;P but i still say it was totally worth it. That was my #1 concert till date and i had the most fun. Even now as i write this post , i am happy that i was able to attend it. 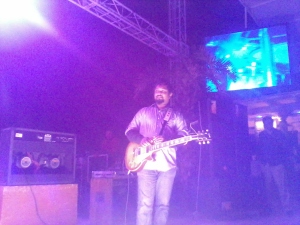 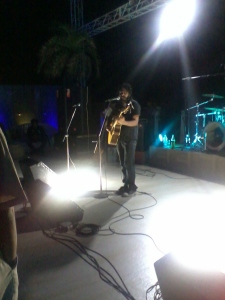 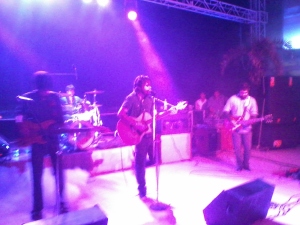