Kanyakumari was just a few hours away from Kovalam, the venue of 2015’s hackbeach, that I() decided to plan a day trip to visit the Southernmost tip of the Indian subcontinent. We toyed with the idea of taking a cab like a friend of ours did but in the end we opted to take the Island City Express to travel the roughly 3-hour journey.  This was turning out to be quite a low cost trip thanks to the company I had. One of the concerns I have with solo tripping is that it does burn a hole in your pocket if done for short periods of time.

Tip: To get to the station from Kovalam, you have to choose between a rick (tuk-tuk), cab or the bus.

So we caught the train around 12:30 and reach Kanyakumari by 15:00. We were staying at Vedanta – Wake up and since it seemed closeby we decided to walk there. As we walked to our Inn, we got our first taste of  the multi-ethnical, multi-cultural town of Kanyakumari.

After a brief break, we decided to head to the tip, where the action seemed to be; the sea shore. The Triveni Sangam is one of those rare places where you get to see the “meeting” of 3 bodies of water. This incidentally also means that at Kanyakumari you can see the sun rise from the sea and set into the sea as well. However the weather was gloomy and we did not get to see the sunset.

There is a Gandhi Mandapam where his ashes were kept before immersion. This is really a huge empty building populated in some parts by lovers.

As it grew darker we decided to explore the shops around and man! were we in for a surprise. The busy market was full of LED lit shops selling wares for Rs. 30, Rs. 20, etc. Entire shops dedicated to a single pricepoint. 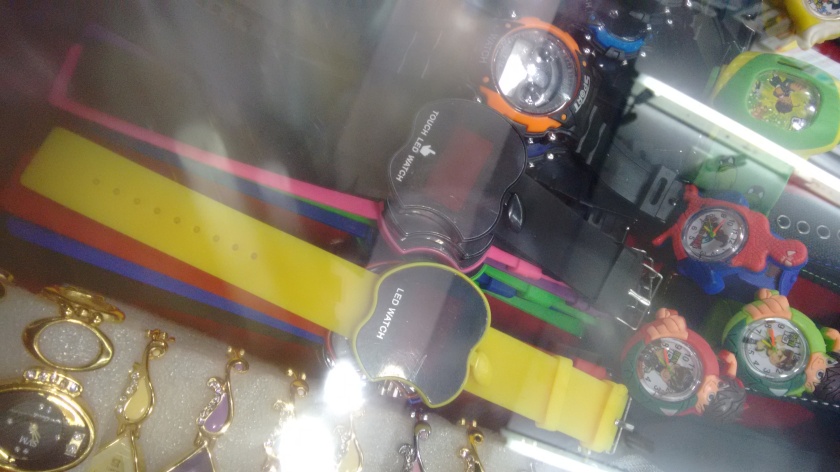 We headed back to Vedanta to sleep early so that we could wake up to see a sunrise.

Unfortunately, the morning was just as gloomy and the crowds that had woken up with the hope of seeing a sunrise had nothing to do. Some of us walked down the stone jetty to the far end and sat down to take in the calmness of the morning but there were people selling watery tea and trying to con people into buying ‘pearl’ necklaces. There was this one guy who haggled with a family and brought down the price from 200 to 20. Later on in the market, I overheard another seller trying to sell similar necklaces to foreigners for $100. I wonder if anyone falls for their tricks.

When we got back we could see that the line to visit the Vivekanand Memorial snaked through the bylanes of the town and the memorial had not even opened yet. So we decided to skip it since we wouldn’t be able to make it back to Trivandrum in time. But we had plenty of time to kill, so I decided to go for a stroll along the coast.

Being from a coastal town, I felt surprised to see the amount of construction and development done to commercialize the shoreline and provide people a place to sit and see the ocean. The roads too were well maintained and the streetlights bright.

Finally it was time to go. We headed back to the train station and waited for the island city express to start.

Back we headed to Trivandrum.

This site uses Akismet to reduce spam. Learn how your comment data is processed.